Apache Flink: A New Landmark on the Big Data Landscape

In this article, I would like to introduce Apache Flink, describe what its main features are, and why is it different from other available solutions. I’ll end the article with an example of a simple stream processing application using Flink.

There is no shortage of Big Data applications and frameworks nowadays, and sometimes it may even seem that all niches have already been filled. That’s not how creators of Apache Flink see it, though.Even though their project is not yet as well known as Spark or Hadoop, it has brought enough innovations to become a real game-changer in the world of Big Data.

In this article, I would like to introduce Apache Flink, describe what its main features are, and why is it different from other available solutions. I’ll end the article with an example of a simple stream processing application using Flink.

This article was originally written for DZone.

What is Apache Flink?

Apache Flink (German for “quick”) is a Big Data framework for stream and batch data processing. It allows developers to build complex data processing pipelines and execute them in a distributed environment. Flink’s main selling point is that it provides first-class support for stream processing and implements batching as a special case.

Why is this a big deal? How can a streaming framework be a game changer? The hatch lies in the fact that some data rapidly depreciates, and if it is not processed rapidly can become useless. Think about fraud detection or processing stock prices. Also unbounded sources of data are now very common and stream processing is a more natural choice.

Many existing systems were developed specifically for batch processing of data of a finite size and are not well suited for this kind of task. Flink, on the other hand, was designed with stream processing in mind

To begin with, let me introduce the main features of Apache Flink:

Here is a bird’s eyes view of the Apache Flink architecture: 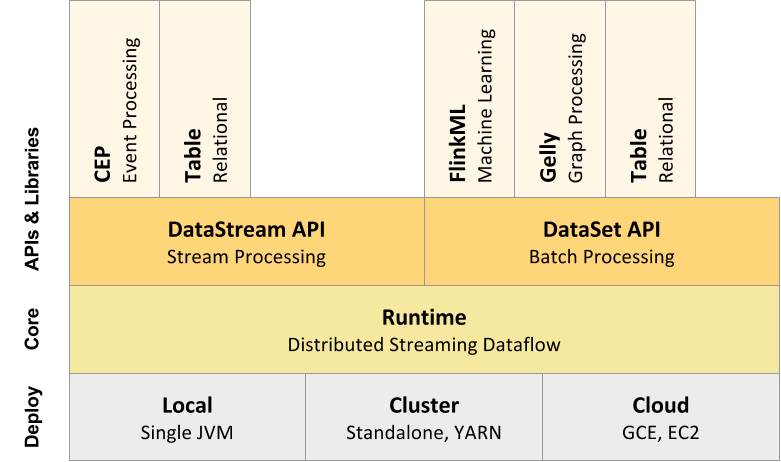 How is it different from Spark?

So far it may sound like Apache Flink is suspiciously similar to Apache Spark. You may even wonder why you would consider a less mature project over an older, well-established project like Spark? Despite the fact they have many similarities, Flink has several significant advantages:

Now let’s try to run Flink and implement a simple streaming application for it. Our application will read a stream of tweets and find the most used tweet in a five-minute window interval.

We need to add a Twitter connector that we will use to get a stream of tweets to process:

To have a proper Flink application, we need to implement a simple main function. We will run it for testing, but Flink will also call it when our application is executed in Flink cluster:

As you remember, when we write Flink applications, we need to define a processing pipeline and first and foremost, we need to add a source for our data. Twitter only allows to read a tweets stream using Twitter application credentials, so we need to create one and copy its credentials:

With this we can create a source of our data and register it in our application environment to get a stream of data:

DataStream is a class that is used to define a sequence of data processing steps Flink has to do. It gives access to a stream of JSON strings in the Twitter API format. To convert it to a stream of hashtags, we need to use the flatMap function that converts a single input element into one, multiple or none output elements:

ExtractHashTags implements the FlatMapFunction interface that has a single function flatMap that is called for every tweet (passed as the first argument). The second argument in this function, collector, is used to output values to the next step of the transformation pipeline. In this case, we parse every Tweet JSON, extract a list of hashtags from it and pass these hashtags to the next pipeline operator.

Notice that we output Tuple2 instances with two fields: hashtag name and number one. We will need this number later when we count how many times each hashtag was used per time window.

Get number of hashtag occurrences

Now we can count how many times each hashtag was encountered during a five-minute period. This is pretty straightforward. At first, we need to define a key in our stream using the keyBy function. It is somewhat similar to “group by” functions and means that the following operations will be performed on individual groups of data. The only parameter to the keyBy function specifies what field in each input element should be used as a key. In this case, we pass 0 since the first element of each tuple is a name of a hashtag.

Since the stream of tweets is unbounded, we need to specify processing duration. For this, we need to use the timeWindow function that defines that all processing should be done on consequent five minutes intervals.

The last function defines how to process elements in each fiveminute window. Since we want to count how many times each hashtag was used, and since the second element of every tuple is equal to 1, we can use the sum function.

At this stage, we will have a stream of hashtags with the number of times every hashtag was encountered per five-minute interval. Now we need to find the top hashtag in every time window. First, we need to call the timeWindowAll which will allow us to process all elements in a stream in a specified time window.

The last step in our pipeline is to output the data somewhere. Here we use the print function that will simply print the output to the stdout, but we could alternatively send the output to a file or an external system like Kafka or HDFS.

Now let’s see how we can define a function that will find the top hashtag. To do this we need to implement the AllWindowFunction that has a single method apply with three arguments:

Notice that in this case, we do not produce a Tuple as in previous examples. Instead, we produce a POJO instance. We could output a Tuple with four fields, and it would work just fine, but I wanted to show that Flink can also work with POJOs and is not limited to Tuples.

The stream processing won’t run just yet since all previous code is needed to build an execution plan. Now we need to instruct Flink that the execution plan is finished and that it can start executing it. To do it, we simply need to call the execute method on the StreamExecutionEnvironment instance:

Now if we run the application and see the result:

If you want to know more about Apache Flink you can take a look at my Pluralsight course where I cover Apache Flink in more details: Understanding Apache Flink

Here is a short preview of this course:

A deep dive course about DynamoDB